I got a call from my hangar neighbor and he asked if I could give him a lift to Allentown - KABE  or Queen City - KXLL. If not able it wasn't a problem, he was going to rent a car and drive one way so he could pick up his plane from service.  A reason to fly?  I'm in, let's meet at eleven and go from there, I'll turn the preheats on.

I quickly changed and grabbed my flight bag with video equipment then headed over to the airport. I pulled up to the hangar at eleven on the dot. The only thing remaining was the preflight, then tug 3 Tango Charlie out on to the ramp. 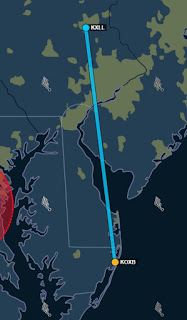 Chet and I climbed aboard and I got the fan turning, deciding to set up the cameras while I built up some oil temps.  Runway 14-32 is still closed by NOTAM so I would have to battle the winds from runway 2.

I held short of 14-32 as a Comanche rolled out so he could easily clear the runway without going full length. I had to ask how the winds were, his response, "Wooo Buddy".  I was now almost sorry I asked.

Once clear, Chet and I back taxied for runway two and turned into the wind. It was a wild take off, not fun at all. We climbed out riding the bucking bronc until finally breaking into smooth air. The plan was to cross the Delaware Bay and Philadelphia's airspace at 7,500 feet. 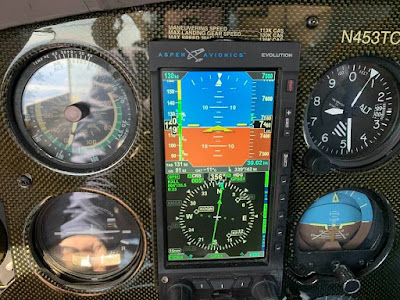 Dover approach handed me off to the first Philly sector and we were on our way. Philly handed me off at least one more time before eventually handing me off to Allentown Approach. Once on with Allentown I reported that I had the weather and I was directed to report the airport in sight. 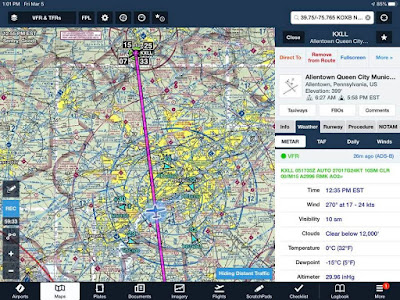 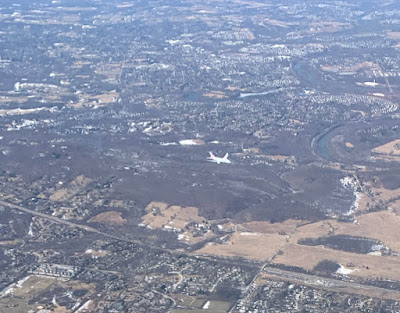 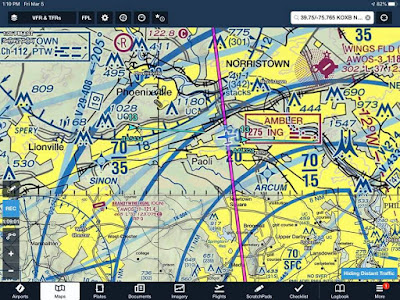 By this time we were making our way towards pattern altitude and once again riding the bucking horse to the pattern. My first attempt had a heck of a crab angle right down to the numbers. I actually ran out of rudder and decided to go around. Cram Climb clean, I was out of there.

The next attempt wasn't looking much better and Chet suggested Allentown if we could not land here. We had plenty of fuel to give that a shot if needed.  Once again I crabbed my way to the numbers and found a calm space in the cross winds, just enough for me to plant the gear on the asphalt and slow down. 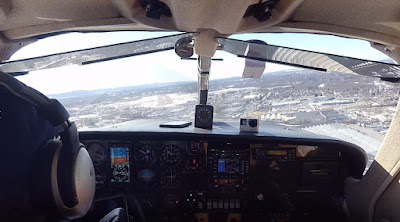 I immediately retracted Flaps and kept the appropriate Aileron corrections for the winds. It was a smooth taxi clear of the runway, and now heading to the terminal. I booted Chet out and turned for home, setting up the GPS and then taxied back out to runway two-five.

I made my call then taxied for departure. 3 Tango Charlie lifted off and I once again climbed on that crazy horse. I actually did that crap in my teens and twenties, I'm too old for this at my age. Once at altitude, 6,500 feet for the ride home, things settled down a bit. I hand flew most of the way home and even though the plane was trimmed I had risers and sinkers until across the Bay at Dover. 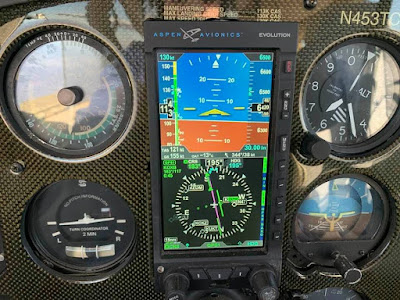 When it felt smoother then my ride across Philly, and now across the bay, I turned on the autopilot. The ride was much more comfortable and managing systems was a lot less stressful today then hand flying. I checked on Ocean City weather and tuned my radios for home, I was ready to tangle with mother nature one more time.

Once in the pattern at OXB the ride was just as bad as I had left it this morning. Hang on to your hats boys, it's going to be a fun one. On my first attempt I was oh so close to the numbers but was so out of shape and getting beat up. Cram climb clean, rinse and repeat, we're out of here. Round two was just as 'fun' but somewhere between the numbers and the aiming point markers I got 3 Tango Charlie to settle in and put the rubber to the runway. I was happy and thankful to be home with no dents or dings and the gear still attached.

Gary, I've been there and done that. It is no fun. You handled those landings in textbook style. I watched on my computer screen but had a very real feeling in my belly that only those kind of bumps and winds on final can give you. It was very real. Thanks for flying a "TC" plane.

Tom,
Thanks for watching and commenting. It was the first time I actually had a queasy feeling in my gut. I have never been sea sick or air sick, but yesterday was obviously my limit.

That was not fun. Forget my twisted stomach, my heart couldn't take it. Sure am glad you got home to write about it.

Loved your sunset shots on your blog. Mary and I are heading out to Albuquerque for the balloon fest in early October, so we will be flying around the area. You're about a two hour flight from ABQ, we may have to catch up with you and Jim.