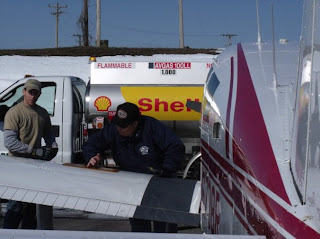 Yes, today was CAVU and I wanted to take advantage of that big shinny thing in the sky I think folks call the sun. It's been awhile since Mr. Sun has graced us with a warm day but today fit the bill. Mary and I headed out to Angels for breakfast then made a stop at Mom and Pop's to hang a picture and hook up their DVD player. We finished up the to do list and decided it was time to go fly.

I headed back by the house, force of habit, then cut through our development and south for the Airport. Mary started to feel ill with her 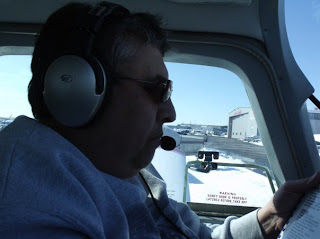 diverticulitis acting up. I turned back for home and Mary said go without me, I just don't feel good and want to lay down. I made sure she was settled and then sent out a few text messages. Vince was ready to fill in so I gave him a meet time and headed back out the door.

I started my pre-flight and ordered fuel when Vince called from the gate. We finished up the pre-flight, watched some planes in the pattern and waited for the fuel truck. I completed the fuel sump and we saddled up ready to get flying. I contacted ground and was cleared to taxi for 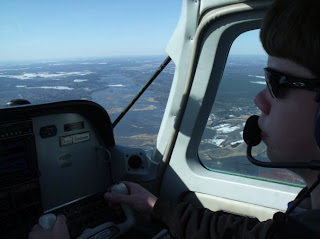 departure on runway two seven. We had a good headwind and climbed out followed by our approaved left turn on course.

Vince did pretty good on his VOR pop quiz. I asked himn the approximate heading from the DuPont (DQO) VOR to Millville 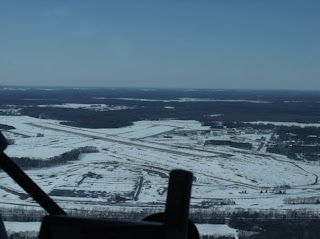 (KMIV). Vince brought along his own current sectional and folded it down so it was manageble then gave me a heading, close and after he gave the headings on the VOR a closer look came out with the correct answer. Not bad for 13 years old and no real flying experience. I track the 143 degree radial from DuPont and it brings you right over Millville. I had Vince plug the direct to on the Garmin 530 for back up.

Millville radio was really a mess today. Everyone got the 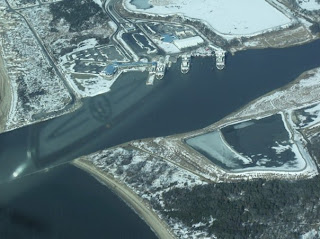 full brief to include wx, traffic (even the over 5 minute old stuff)all NOTAMS and whatever else they could use up air time with. While they were falling in love hearing themselves talk we were keeping our head on a swivel looking for traffic that was shooting the ILS 10 approach while I was positioning for a 45 degree entry to runway 28. I think I ticked off Millville radio when I told him I want to hear the guy shooting the ILS for position not him. I best get off the soap box. 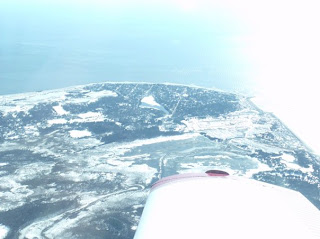 J was the only right turn available to me from where I touched down. I eventually cleared the runway and taxied back. I announced 08Romeo departing two eight Millville and you guessed it, he gave me the full readback. I think the airport should just take the AWOS off the air and just send all NOTAMS to Leesburg, VA so they can play air traffic controller and tie the darn radio forever!!! Oops.....I'll get off the soapbox now and kick it aside. 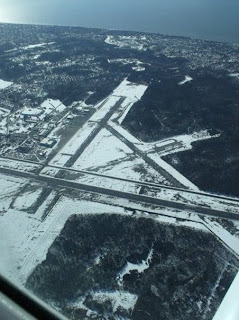 From Cape May we were going to head back home to Wilmington but made a detour to check out Woodbine Airport. I could have 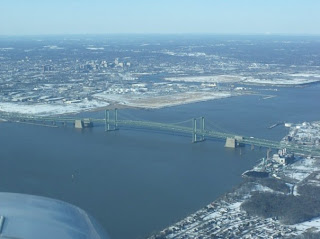 landed there but after flying over and checking it out I decided to get us headed back home. I dialed in the DuPont VOR and had Vince track that back to Wilmington and I switched the page on the Garmin 530 to read about airport info, thats right no magenta line to follow. Vince aced it! He held altitude and couirse very well witha tranfer of controls as we approached the 15 miles out mark. We role played some ATC and he gave it a shot with a script I jotted down after we discussed it. He was a bit nervous and checked in with all the info until I gave him the cut sign. I reminded him he had to make contact first, then when they call him provide the who what where and with ATIS info.

We got a traffic call out for a C130 heading in for runway one. I was directed to turn to the 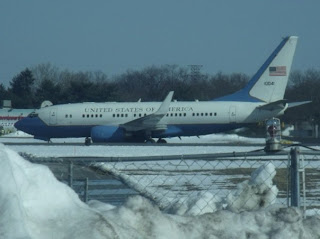 twin spans up river, I complied. I was aksed to do a 360 for spacing and once again I complied. Finally I was given clearence to land runway two seven. As we taxied in Vince heard the tower direct an aircraft to remain clear of the Delta airspace expecting a 15 minute hold. We continued in to Red Eagle and secured the plane. Vince noticed activity around the VP's aircraft that was parked at the Air National Guard, maybe Biden was flying out. Every aircraft that called in was put on a 15 minute hold and a few IFR flights asked if they could cancel and proceed VFR, the answer was no. Well that sealed the deal for us, there was no aircraft emergency that we could hear, the SUV's were buzzing around the 737 and operations was making a runway check. Sure enough, the 737 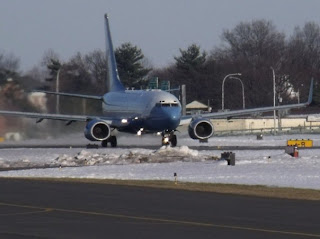 called up to taxi and was cleared to depart under the Air Force 2 call sign. Vince switched his scanner over to Philly approach and just to confirm had Air Force two checking in with them, pretty cool stuff.

So, two good landings in the book, Vince got some flight time with VOR tracking and gave the radios a shot. A great day to be flying and sharing the passion I have for flight.

Hi Gary, I knew I should have texted you, we had a nice lunch at Cambridge. That place gets busy on Sunday but the food is always good. You should have stopped into woodbine, I gotta show you all the new ADS-B goodies installed in Mooney 1159p. Hope all is well, Mary feeling better.
Jeff

What a nice day to spend in the air! Love the details as usual and the nice shots of AF2.

We've got a guy that reminds me of your Millville stories down this way, too. If I want an airport advisory, I'll ask for it!

//off my soapbox as well

Yeah that Millville radio thing is pretty weird. I flew into there for the first time about a month ago. I started making position calls and then this guy jumps in playing ATC. Weird. Then I remembered this kinda scenario from my PP ground school. I didn't think this existed anymore. It seems pretty dumb - the guy just repeating what everyone else is saying.

I have to say though... Sunday (south of Allentown PA) was NICE NICE NICE.

The thing that really bugs me the most.....they are on the air, remote from Leesburg, VA.

Wow, that seems like a really great flight man. Glad to hear you've got someone learning the craft after you. ^__^