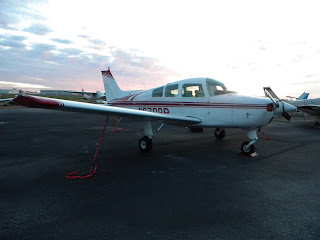 I've managed to find an additional two owners who I can not seem to make contact with, at least not yet. I am however, getting to know the telephone operators in and around Dallas, TX. While putting my new Adlog system together I must have read through every scrap of paper associated with the plane that was passed along to me (for the third time). The two new owners added to my list are the Wilson's, Kyle & Susan(TX)in partnership with Brad Benat and Rudolf Fink (MO). here is the latest list/line up of owners.

Took possession from the factory, Ken Miller (GA). Next up by my best guess would be Robert Slack (MS), Rudolf Fink (MO), a ferry flight in June of 1995 to somewhere I can't make out and for what reason (I think it was out of annual) I'm not sure. From this point I think it went to Dave M (IN) then a dealer (maybe Million Air Evansville, IN) sold to Jean Michael (IL - September 98) and somehow back south to Texas. I think this is where Kyle Wilson and Brad Benat came on board then eventually sold the plane to Emery, the man from Palestine, Texas that I purchased 08Romeo from. I believe this is the order according to endless search of the mountain of papers, for all I know it could be bass ackwards!

I have receipts from annuals back to 1981 and between the log books and receipts for work I can honestly say I wish I had a dollar for every light bulb replaced. I did find an old flyer advertising a reduced special offer for annual service at $17.00 and hour, ok who wants in on that price???? Again, I'd love a dollar from everyone wanting to get in that line! I'm working on posting that flyer and a few pictures sent to me from Dave M. I must also mention that Dave M now flies a knock out Beech Bonanza, wow, a sweet looking aircraft to say the least, here is Dave's current ride. Thanks for all the history and sharing the pictures of your Bo. 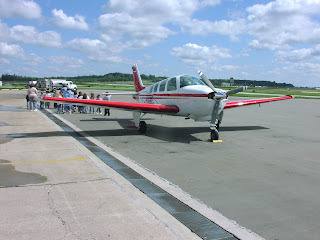 It was a rainy on Saturday here in Delaware so it provided me some extra down time to further investigate 08R. I did manage to track down the original owner Ken Miller. I received a return call from Ken on my way to Cape May this morning to in fact confirm he was the first owner. After reading his bio I know now why Mary and I were so drawn to 08Romeo. Ken is a big time, ok really big time animal lover. Ken Miller is the man who provided the beautiful Golden Retriever "Duke" on the first series Bush Beans commercial. Here is a short snip from his Pet Lodge Pet Resort web page based in Georgia.

Ken's dogs were known as the Jim Dandy© Dogs for 9 years, until Alpo© bought out Jim Dandy©. During this period, Ken was responsible for supplying the dogs for all of Jim Dandy©'s commercials and photographs for pictures on the dog food bags. As of 1995, three of these pictures are still on the Jim Dandy© bags. Ken's golden, "Mambo," is also known as "Duke," the talking dog on the Bush Beans© commercials. Ken has supplied dogs for over 120 TV commercials, plus approximately 35 still shots, for a wide variety of sponsors.

Ken sounded almost as excited as I was to finally make contact. Ken obviously sold 08Romeo but went on to own two other aircraft. His travels took him to the Bahamas and Caribbean. Ken traveled a good bit in our Sundowner back in the early 80's while working to finish his show dogs, mission was accomplished. Of course our discussion drifted right into dogs, rescue flights and finally back to planes. I promised to send him my blog link so he can see 08R in her new colors, panel and interior.

One of the really strange moments came when we talked about his first venture into starting his Pet Resort, it was called Cloud Nine. This really took me for a loop as I explained our Friends passion for animal rescue flights and his Non-Profit is Cloud Nine Rescue. I think Ken even did a double take on that. A great time chatting and filling in another link in 08Romeo's history. At least she is used to having tailwaggers along for the ride. More to follow.

This has been some excellent research so far, Gary. It's going to turn into the six degrees of Gary Mascelli before all's said and done!

"It's going to turn into the six degrees of Gary Mascelli"
LOL....yes, it seems that way :)

It's been a blast making the calls and hearing the stories of her many travels and so far not a bad word about her. I'm sure there is so much more to find, my seasrch will continue!