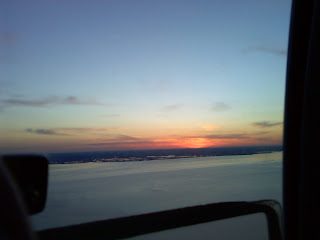 A beautiful sunset, the start of a very productive flight. I took to the sky this evening with MikeB as my safety pilot, trying to knock out a few approaches and a night take off/landing to remain current.
The plan was to depart Wilmington (KILG) and head over to Millville for some fun. We were soon launching off two seven after turning down the offered runway niner that had a quartering tailwind, what was the tower thinking. Anywho, off to New Jersey for a round or two of approaches at MIV. I'll get this out of the way first by acknowledging Millville radio wasn't to bad tonight. Mike did joke about ME having to deal with THEM.
Lets get started. I first shot the RNAV GPS RWY 14, went missed and climbed out to the ZUNIE intersection then broke off for another approach. Next up was the RNAV GPS RWY 32 Approach. Mike and I role play ATC for vectors which is always great radio work practice as I head to the Initial Approach Fix LAYIB. The role play with vectors really helps, you are flying the plane, interfacing with the garmin 530 with new direct to intersections and maximizing the workload, multitasking as a.....ahemmm...I affectionately call it. I admit 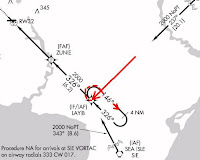 that I blew the Procedure turn but recovered, for what that's worth. The 530 tells you the correct entry to use but I went with a direct entry. The correct procedure would have been a parallel entry. I did travel in bound on the 326 degree radial tracking solid prior to crossing the LAYIB intersection and made a nice approach from that point. Next up was the ILS RWY 10 for Mike and I both as I got to safety pilot after my approach and enjoy some of the night view. Mike was rock solid briefing the plate and getting back to the scan, always maintaining heading and altitude. I need to work on picking up the pace of my scan and not fixating.
We both decided to head back to ILG and shoot the ILS RWY 1 then call it a night. I contacted Philly with my position and altitude requesting a practice ILS 1 approach for Wilmington. I acknowledged my squawk code and altitude then followed vectors for the approach. Philly then asked if I was a BE36 Beech Bonanza), wishful thinking, I thought to myself and advised a Bravo Echo two three (Beech Sundowner).
I was about 4 miles from intercepting the ILS and had received my final turn to do so when I configured for 90 knots and a notch of f 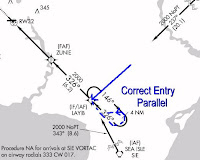 laps. 2200 RPM is level flight with a notch of flaps and we were on our way. Localizer is alive as I turned to the airport. A bit quicker then needed which required me to slow my turn and let the localizer catch up, yes I was a bit anxious. Philly turned me over to the tower and I made my call, Sundowner 6708Romeo on the ILS in bound for full stop. I did a good job tracking the ILS as I set my power to 1900 RPM for a 5-6 hundred foot per minute descent. I needed to adjust for the glide slope a smidge but overall not bad as I looked up at 400 feet and continued in to land.
Good practice as I work my way to the check ride. I may be up Thursday night for another few rounds, we shall see. Friday's plan is to explore New Garden for a possible relocate of the plane (only 15th on the list for a hangar). Friday at some point I will run Mike up to Lancaster for the Cirrus then swing over to Wings (KLOM) for the PACC happy hour. Saturday is the first scheduled beach run of the year. Yes, I know the water is still freezing but Mary wants some beach time to work on the tan. Sunday will be Easter dinner with family but if I'm lucky and the timing is right I may be able to sneak in some flight time.
Posted by Gary at 10:42 PM