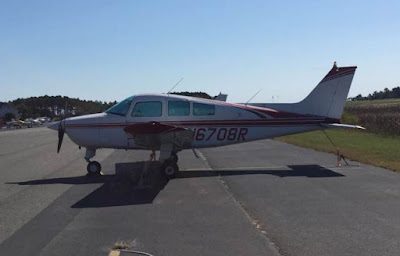 These last few days I've been logging some flight time, it sure feels good. Today's mission is a flight to Ocracoke, North Carolina to meet up with fellow Beech Aero Club (BAC) members. This is the first Mid-Atlantic event that I scheduled and also the first in a quest to reach out to a location in each state in the region. Setting up and attending these events will allow Mary and I to make new friends, visit with friends we've made since joining BAC and log some flight time. 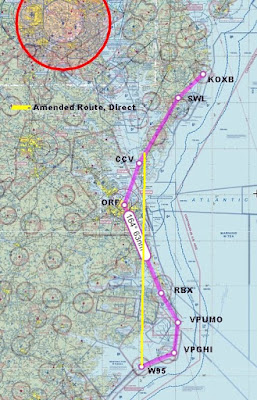 My bride hasn't been feeling that great but she was excited about heading south to some warmer weather. We were both up by 7am, I got up earlier to feed the zoo then climbed back in bed. Once the critters were good to go we packed a bag with water, munchies and fruit for the flight. We rolled into OXB and I began my pre-flight. Upon returning from Cape May yesterday I ordered the tanks to be topped off, specifically saying not my normal fuel request but actually topping off both tanks, the response, "got it". Hmmm...they didn't "get it", 08Romeo was fueled exactly where I typically request, slots plus five, which brings me to fifty gallons. The fuel truck came out and topped off the tanks, taking a total of nine gallons. The lineman said, "good thing you checked." I responded, I always check, I wouldn't trust anyone but me to check the tanks. 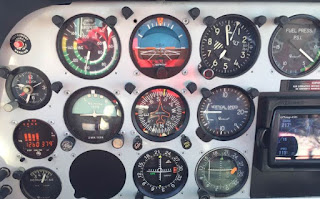 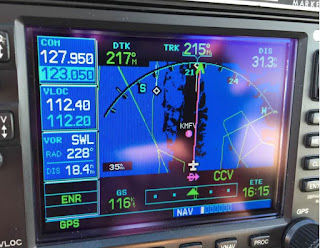 Eventually we were ready to get the fan turning and did so once belted in.  08Romeo was at idle warming oil and I was updating my flight plan and getting it cross filled to the Garmin 530W. With the weather noted I taxied for runway three-two and performed my run up before calling Potomac Clearance and Delivery.
I was cleared to W95 as filed, upon entering controlled airspace direct Snowhill VOR (SWL). Altitude 3000 expect 6000 in ten minutes. Approach frequency 127.95 and squawk 43something.  That was easy and it's great to have the remote frequency for C&D back online.


I made my departure call and launched, with full fuel the take off roll increased a few hundred feet and we were soon climbing out. It felt good working in the system even though it was a perfectly clear day. We cruised along enjoying the view as we made our way down the peninsula. Patuxent handed me off to Norfolk who offered me direct Ocracoke. Easy peasy, I thought, and accepted the change. This would mean more flight time over open water as we now crossed the mouth of the Chesapeake Bay. I managed a few pictures and made gentle rudder corrections to keep us on course. The flight conditions were smooth and little control was required.
﻿
I crossed through all the Restricted areas along the route, R6606 off Virginia Beach and R5314 located southwest of Manteo, Dare County KMQI. Norfolk handed me off to another sector and they passed me on to Cherry Point Approach.

Cherry Point gave me a descend at pilots discretion to 4000. I started a descent then thought better of letting down to soon since my route would now have me crossing twenty-six miles of the Pamilico Sound. 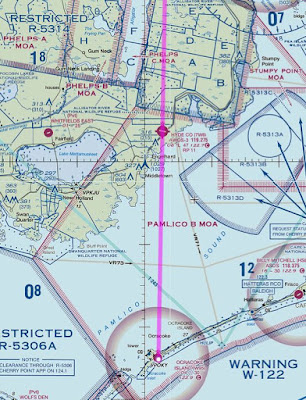 Once I had Ocracoke made, I started a descent for the pattern altitude. I made an ok landing and taxied to the ramp, everything has been updated since Mary and I last visited back in October 2008. 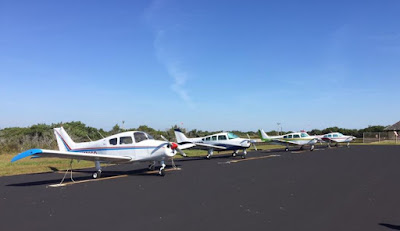 One by one the remaining three aircraft arrived. Mike K in his beautiful Sundowner, Jeff B in his gorgeous Sierra and Don in his freshly painted beautiful 63' Musketeer. Four mice on the ramp, looking good. Well, from a distance 08Romeo looked good but she was still sporting construction dirt and grime and was pretty gross.
﻿
﻿

﻿ I made a call to Howards Pub and they sent out a golf cart limo to pick us up and transport us to the restaurant. We dined inside enjoying good conversation and good food. Mary and I had met Mike at BACFest but Jeff and Don were new to us and the common interest in the club and aircraft quickly made everyone feel at home. I think everyone is excited about next years BACFest scheduled for Louisville, Kentucky...we might see a few new faces. 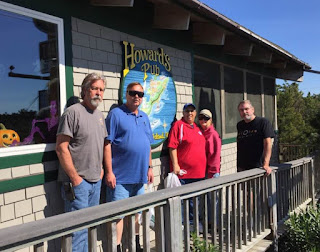 We finished up lunch and posed out front for a group shot then made plans for the afternoon.  Jeff was heading back to the airport via Howards golf cart limo and the rest of the group decided on renting a cart to tour the town. Ocracoke golf carts said there would be a fifteen minute wait to pick us up so we hung out chatting in the parking lot.
﻿
Mary was starting to fade since it was her first real day up and out after being sick. She took cover on the deck, resting on a bench while the men waited in the lot. My bride came over to me and I knew, she was cooked, I apologized to Mike and Don and said we were going to head back to the plane. Don decided to walk into town, he is a frequent flyer to W95 and loves the place. I was looking forward to the tour he was going to provide, maybe the next time. Mike headed back to the airport with us and then walked over to the beach.

Mary climbed aboard and buckled in while I finished the pre-flight. All things looked in order so we started up and back taxied on runway six for departure. Of course I forgot to turn on the video, duh, I'm adding a post it note on the panel. As we climbed out I turned the camera on and captured what I could. Mary arranged her neck pillow and unplugged her headset then settled in for a nap. I didn't file for the trip home, instead, I picked up flight following with approach in the reverse order of our flight south. 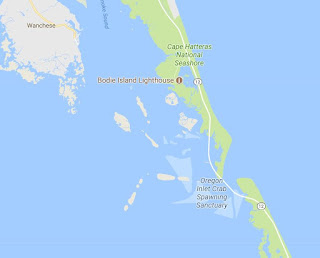 I enjoyed a nice tail wind and enjoyed the view. There didn't seem to be much traffic today, not even the typical call out for commercial flights. Unfortunately I didn't get treated to any fighter jets that are usually in the area. The jets are hard to capture on video but the visual is always welcome as our nations finest do what they do better than anyone else on the planet.
﻿
My fuel burn was looking good and I should arrive in Ocean City with fifteen gallons remaining. Switching tanks every thirty minutes would leave roughly seven or eight a side and I like as much as possible. Since we were ahead of our original planed return time I decided to divert to Accomack (KMFV)and top back off, taking ten more gallons in each tank. Accomack was a gas and go, the man working there helped the Cessna in front of me fuel and helped me too. Ok, he chatted while I pumped the fuel. Nice man, very friendly and alerted us to the new after hours passcode to access the terminal bathrooms and flight planning station. They also have a courtesy car available.﻿
I climbed back aboard 08Romeo and taxied out for runway three. When announcing my departure I said runway six then quickly corrected myself adding that it would be a neat trick departing on six...mixed in with me laughing at my self. I was getting tired. It's a short hop home and with no traffic in the pattern I make a straight in for runway one-four. It's good to be home after a fun day of flying and breaking bread with fellow club members.﻿ I hope to try and get 08Romeo a bath sometime this week and fingers crossed, our hangar will be open for return.
Posted by Gary at 11:30 PM