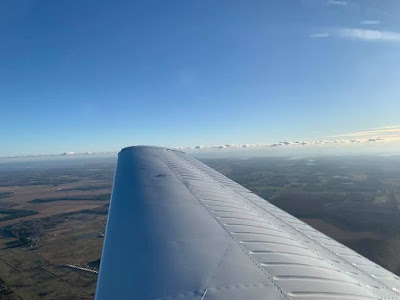 Thursday
I made a call to Sussex Aero located at the Delaware Coastal airport (KGED) to set up a service time for 3 Tango Charlie. Rob said he had time available on Friday at 9am,I said pencil me in, I'll be there. With the forecast temps calling for mid thirties, I thought it best to turn on the preheats around 3pm Thursday afternoon, providing sixteen hours to get toasty.
This Morning...
I arrived at the hangar just after 7am and took my time with a sump, even though I didn't take on fuel, and a fuel quantity check. The fuel stick was showing three inches each side and that makes for a total of 42 gallons, plenty for my 10 minute hop out and back. I set up only one camera and then tugged the plane out on the ramp. On start up my oil temp was showing 106 degrees.  I sat for a bit to build more temp as I noted the weather for my departure.
I taxied for runway three-two and after completing my run-up launched for Georgetown. The ride was smooth despite a 29 knot head wind. I kept it pretty low today, holding altitude to fifteen hundred. There was traffic departing, at least that's what I thought he said  as I caught runway two two.  Initially I didn't have any ADS-B targets so I assumed he was taking off. 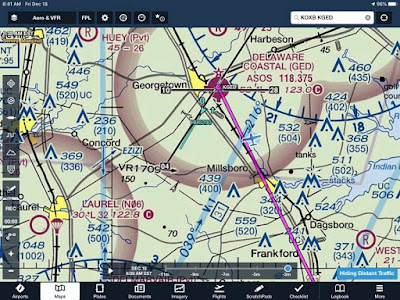 I did have a visual as the jet was rolling and watched them climb away turning out to the north. I crossed midfield and entered the pattern for runway four. I made a smooth landing and taxied for Sussex Aero, let the fun begin. 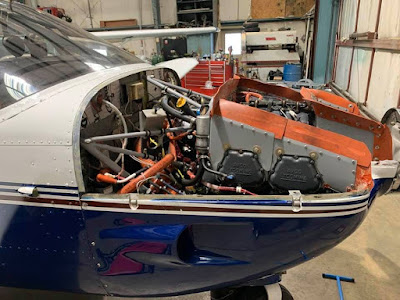 Steve helped me push 3 Tango Charlie into the shop as we tucked in close to a Cessna. I have a mid-tail so we will be close when we get into position. With 3 TC safe and secure the shop bifold door closed and we got busy. Steve went under to locate the quick drain, and after aligning a bucket and slightly turning the nose gear a steady stream of used oil was unobstructed to the bucket. I forgot my test kit but thankfully Steve had a spare container that was clean.  We grabbed a sample midstream and I was good to go for my oil analysis. 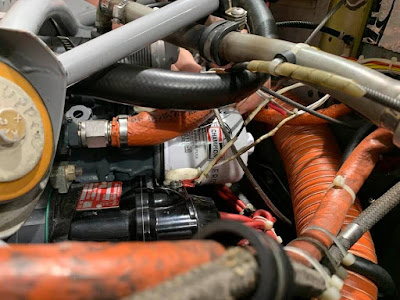 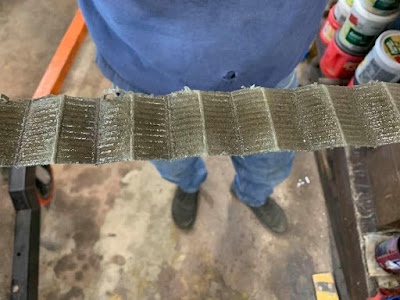 Steve managed to remove the filter will little spillage, and install the new filter. Once the oil was completely drained the quick drain was closed and I added seven quarts of Phillips XC 20W50 and one bottle of Camguard. 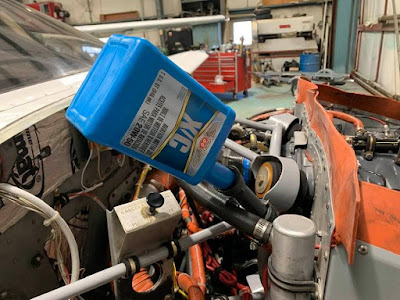 Once the oil change was completed we moved on to the Shimmy Damper. I have had an on and off shimmy when landing and it was time to get the issue addressed. 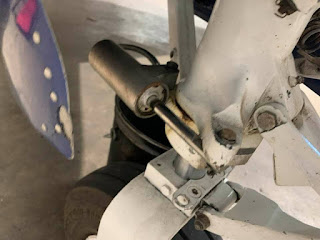 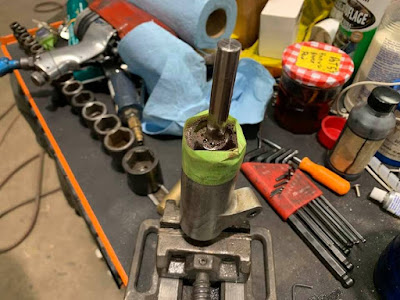 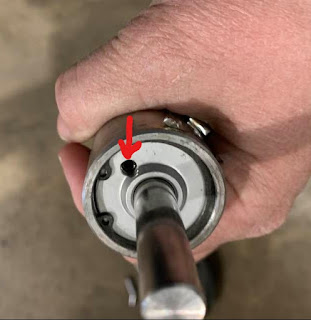 There was a dead spot that you could feel when you moved the damper shaft. As you began to compress it there was a blank space that moved quickly and then the pressure provided resistance once again. Steve compressed the shaft multiple times until the bubbles finally stopped, the dead spot was gone.
With everything buttoned up I took 3 Tango Charlie out for a run-up/leak test. Out to the run-up area just before runway four and let the oil warm up. The run-up was good to go, pressure and temps checked out, and I returned to the ramp at the shop.
After squaring up the bill I climbed back aboard and headed out for home. A short hop of maybe ten minutes and I was on the ground at Ocean City. With 3 Tango Charlie tucked away in her nest, I headed to the house.  A fun day with only two short hops, but it felt good to get in the air.
Posted by Gary at 5:49 PM