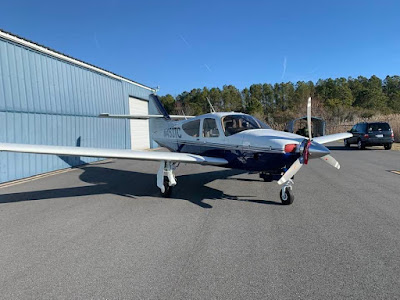 It was a chilly morning but a crystal clear day for flying here at the beach.  Unfortunately, there is nowhere to go with everything closed up due to Covid.

As an airplane owner I still need to keep the oil circulating in order to prevent rust.  Yes,  I use Camguard and have the oil changed as recommended by Lycoming. The best way to keep the powerplant fresh is to run it, and so I did. I asked my bride if she wanted to go for a ride this morning and I got 'the look'.  No, not the you did something bone-headed look, instead, it was the are you nuts look. Hmmm...I'll take that as a no. 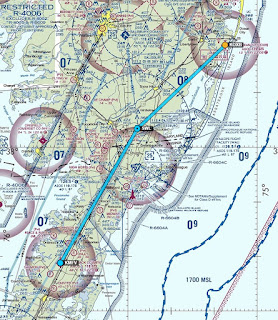 Friend and fellow pilot Chris N sent me a text at 9am asking where I was headed this morning, since he was at Millville (KMIV) and the restaurant was closed. I responded that I was trying to get motivated and get over to the airport but had no clue where to go for eats. Chris decided to head back home and I decided to fly south over the Delmarva Peninsula.
METAR KOXB 271353Z AUTO 36007KT 10SM CLR 01/M07 A3034
As I pulled out of the garage I noted the temp display on my dash, 47°.  By the time I was out of our community and on the main road it was showing 35°, thankfully I had 3 Tango Charlie's pre-heats on overnight.

I went through a detailed pre-flight and also lubricated all locations, as noted in the maintenance manual, with LPS2. I like to make sure there is fresh lube after a wash and wax.
Winds were 360° at 7 knots so I decided on runway three-two for departure.  There was a plane doing pattern work and the young lady did a nice job landing and on her radio work. When I was ready to go I advised holding short for the landing traffic. The Piper touched down and then retracted flaps and climbed back out for another round. I positioned and took off, climbing out and departing the area on the crosswind. 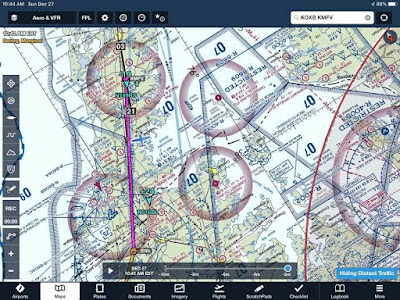 It was quiet on the radio so I switched over to Patuxent approach on 127.95 and also monitored guard. Most of the traffic call outs were well south or east of me and ADS-B was painting everything in my area. Guard provided little entertainment this morning.
I headed south to Accomack County Airport, making a left turn towards the Atlantic and then heading north for home. Once turned for home I side stepped right to provide clearance for traffic heading south at my 12 o'clock as they descended for landing at MFV. 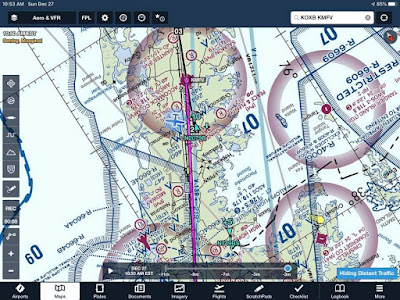 The remaining ride home was smooth and I let down for the airport at ten miles out, also making my advisory calls. There was a Cessna Amphibian inbound from the north and another Cessna from the west.  I continued in and made a nice landing, letting 3 TC roll out full length and not using any brakes. I called clear and taxied for the hangar.
Once the plane was secured I noticed aircraft making low passes over the field. I closed up the hangar door and went out to see what was up. To my surprise the Amphib was still on the runway, or so I thought. I jumped in my SUV and headed for the gate, slowing down to take a look at the trucks gathered around the aircraft. I'm not sure what happened but the plane was just off the runway on the grass, maybe a flat, I have no clue. 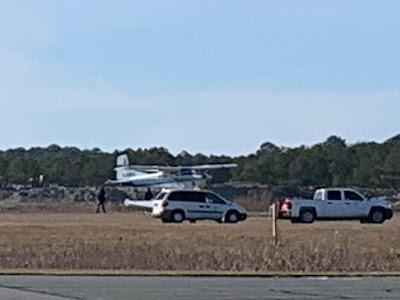 The airport manager drove by in a rush, heading to his hangar, I followed but at a slower pace. When Jamie came out of his hangar he had a couple of wrenches in hand. I asked if I could help with anything and he said no but thanks for asking. With that I went about my business, ordering lunch from the Southside Deli for me and my bride as I passed through the airport gate.  I made a stop at the Deli to pick up my order, subs and chips, then enjoyed lunch at home with my bride.
Posted by Gary at 11:30 PM