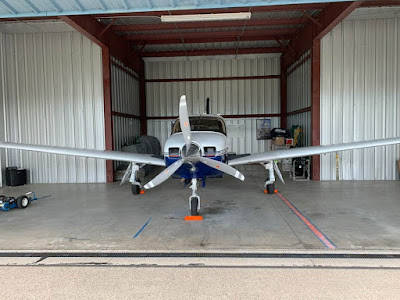 I was up early and ready to head to the airport, I really needed to dial it down a bit.  Since I am still waiting for transition training, Bill B, 3 Tango Charlie's previous owner, introduced me to Bill H.  Bill H is a Commander 112A 390 Super® Commander owner. We agreed to meet this morning at 8AM on the ramp at Ocean City (KOXB).

Of course I was at the airport at least an hour ahead of time, wanting to have everything ready. I did a final walk around and sumped the fuel. Everything looked perfect so I hooked up the electric tug and helped 3 Tango Charlie out into the sun...er..um...high overcast sky.
Bill was right on time and I managed to capture him landing and his taxi into parking. We chatted for a bit then after closing up the hangar we climbed aboard 3 Tango Charlie.  I would be right seat today, no PIC time for me. I still need the transition training.

My adrenaline was pumping, I was eager to get in the air. Bill called clear prop and turned the key....nothing.  What?  He tried again and just maybe one blade. Hmmm... I had the charger on the whole time, maybe not plugged in far enough. I managed to climb back out and get my SUV started and parked near the aircraft battery access external hook up. 3 Tango Charlie took two tries but finally roared to life. I parked the SUV and climbed aboard, lets try this again. The airport was busy today, school planes working the pattern along with transient traffic coming in for the holiday weekend. We were up, the next to roll for take off. Bill gave 3 TC power and we were rolling, a bit longer roll then 08Romeo or the Deb but we were climbing out.
It was a nice flight and I learned a lot from Bill. The controls felt comfortable and responsive. 3 TC trimmed out very nice and behaved well. We flew south over Assateague and then turned towards Salisbury minding airspace along the way. Eventually I turned 3 TC for the beach just shadowing north of RT 54 heading over Fenwick, Delaware. With a turn south I followed the shore and swapped control back over to Bill so he could set up for landing. We worked our way into the pattern announcing downwind base and final. I was the human sponge, soaking up everything I could. Bill made a sweet roll it on landing and we taxied clear.

Once shut down we gave it a minute or two then tried the hot start procedure. It was different then what Bill uses on his Super Commander but I noted his procedure and will amend my checklist as needed.
Bill had to scoot, he had plans with his bride. I captured some footage of his start up, taxi out, and his take off.  Thank you Bill for your flight time today, it was very much appreciated. Also, thanks to Bill B, for the intro, for a great aircraft, and your friendship.

I just have to share a few of the emails I received when 3TC's flightAware track alerted.

Finally!  See you out there poking holes in the sky, Gary!   Judi

Yep, I can see the bugs in his teeth from here, brother Bill! LOL, Go Gary!  Judi