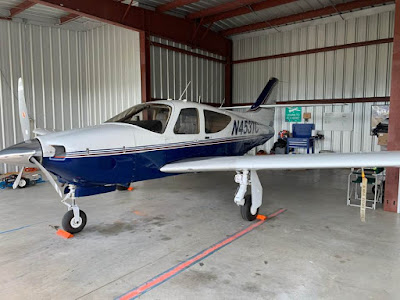 Finally, today is the day that I get to fly left seat. I'm a little bit nervous, but more excited then anything else. Pilot friends have encouraged me, and remind me it's like riding a bike, you have the skills, dust them off and go fly.

My CFI arrived last night amid severe thunder storms. We had quite the light and sound show going on. Ziva slept through it all, while Mary and I tossed and turned for awhile then finally passed out. I am scheduled to meet with my CFI at 9:30. I offered to pick him up so that his bride could have wheels to get around town. I booked our friends condo right in Ocean City so Dick and his bride had easy access to restaurants, the beach, and great sunset views.

All my electronics are updated, charged, and packed. I have reviewed the POH a number of times over the last month, so I'm confident and comfortable with the information. The plan is to video, but the final decision on that is up to my CFI. At the very least I will have the tail camera running.

After completing my preflight and sumping fuel we were ready to climb aboard. I was nervous to be sitting left seat, it's been eleven months. My CFII made me feel comfortable as we discussed the plan of attack for the day.

Upon completing my run up, and getting used to a whole different set of checklists, I nervously squeezed the PTT and made my first call for departure runway one-four. I felt like we raced down the runway but in fact 3 Tango Charlie takes a bit more runway than the Deb used up. At just about sixty-five knots I started to push to the left side of the runway but managed to get enough right rudder to correct as the wheels broke free of the surface. Well that sure wasn't pretty!

3TC is a bit of, what I affectionately called her, a ground hog. She likes to keep in ground effect until she is darn ready to climb. It almost felt like we were gently getting sucked downward.
We soon climbed out and started the round robin of full stop landings. 3TC had to be wondering what was going on, as I adjusted to the new sight picture on final. We took a break and headed to the practice area for a refresher on all phases of flight. Slow flight, steep turns, S-turns, climb and descents in slow flight configuration, landing pattern configuration at altitude, working on the numbers for the plane, emergency procedures, stalls power on and off. I was getting a work out. Dick also had me work on some commercial maneuvers, this helped learn the control and feel of 3TC.

During this mornings flight we worked with the new to me avionics, getting used to the Aspen will take some time.  Working with the GNS 480 felt easier on the sim, sitting in my office chair, then it did flying. It will take some time to get back the multi-tasking skills to the point where I will be looking for things to do. Right now, it almost feels like those initial Private Pilot training days, drinking form a fire hose.
We made our way back north to Ocean City, now using the 'numbers' we had worked on.  I was getting a good workout as I knocked out a bunch more crosswind and power off landings.  Dick really emphasized using more gentle rudder controls and less aileron on final. The goal was to keep things smooth for the passengers. Landings for this mornings session, eight. It was time for something cold to drink and a debrief over lunch.

After taking on fuel to bring us back to 48 gallons we were ready to once again fly. This afternoons plan, more landings. Short/soft field, power off, cross wind, and no flap. I worked on gentle rudder input vs abrupt aileron inputs. Just as it started to feel like I was getting used to the control and sight picture I would plant one. Thanks to Rockwell for the trailing link gear. 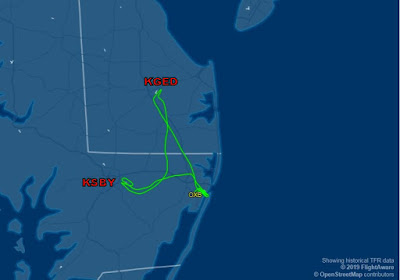 We headed out to Salisbury, KSBY for some radio work in a class D environment and more full stop landings. We continually worked on getting familiar with avionics, especially the Aspen.  After a few rounds at SBY we headed for Delaware Coastal, KGED. I had originally planed for runway two-eight.  Enroute I checked for NOTAMS and found runway two-eight was closed, easy peasy, I changed up and made for runway two-two. This was a one and done, taxi back and head for home. On the way home we reviewed more emergency procedures and I finished todays training with a nice landing on runway three-two.

The numbers for Day 1 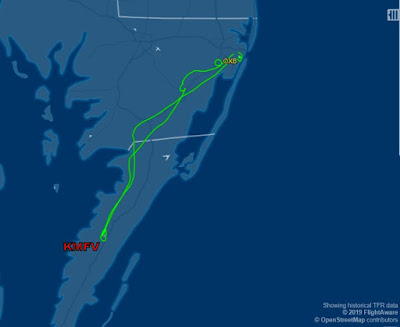 Just for a change of pace we pointed south for Accomack County Airport, KMFV.  More landings and configuration changes to learn the aircraft and how it handles. Once knocking out five full stop landings we headed back towards Ocean City for a lunch break and debrief.

We called our brides and asked if they wanted to meet up for lunch. Both ladies agreed so Mary headed to Berlin and the Atlantic Hotel while Dick and I picked up his bride, Dee.  The plan was for us all to have lunch together and then the ladies could shop the town and head back when they wanted to.
﻿
Lunch at the Atlantic was excellent! We sat out on the screened porch enjoying the breeze and company.

For the men it was time to get back in the air. I had the fuel brought back to tabs, twenty-four gallons a side. Once again we climbed aboard and headed out for more landings. This afternoon would be interesting and challenging for me. Hood work, approaches, intercepting and tracking a course, a hold, and actual use of the GNS 480. We started out with some old school VOR work without the GPS. Toss in the radio work with Salisbury tower and rusty skills...did I mention drinking from the fire hose. 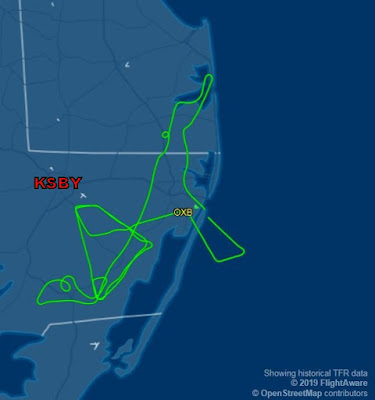 I did get frustrated with my PTS standards while first going under the hood. Setting up the VOR and tracking then setting up the approach, reviewing the plate, and flying was an overload. My altitude varied and I found my scan slowing down, almost fixating at times. I found that using the GNS 480 sim, while in the office, was easy to learn and operate. However flying and maintaining standards while punching buttons took a bit more concentration.

I know I posted this back in April 2008 but it still applies. Todays training reminded

me of the old Ed Sullivan show (showing my age) when he would have the people that spin/balance multiple plates on the poles. Well, that’s how it feels with the scan when the work load gets busy or in my case covered in rust. I'm just trying to keep everything squared away.

After two approaches into Salisbury (ILS and RNAV), each one better then the last, we headed back to Ocean City. The final approach for the day was going to be the RNAV GPS 32. I made my way out over the ocean, six miles, to the Initial Approach Fix GOBYO. I should note I was using the autopilot in heading and altitude mode. I at least figured out the heading bug and altitude holds for the Stec/Aspen interaction. I'm still learning the Aspen. 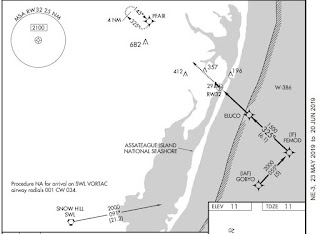 At the top of the T turning inbound I added approach flaps, it helped getting my speed under control. As I crossed the Final Approach Fix, EULCO I extended the gear followed by a second notch of flaps. I disconnected the Autopilot and hand flew the remainder of the approach. The last landing was stable, with just rudder input followed by a squeaker of a landing. Not a bad way to close out my training.

﻿
Next up, five hours of solo work. Following the solo time I hope to catch up with my flying pal and CFII Mike B. He'll have me whipped into shape and flying that Aspen/ Stec combo like a pro.
Posted by Gary at 11:30 PM

He made you earn it! i was sweating in my chair reading all this. Good pilots love the torture... #licensetolearn

It was an excellent workout. I really had some rust to shed and I needed to get back in the flow of multi-tasking cockpit activities.