I swapped multiple text messages with Chet and we agreed to meet at the hangar around 7:30.  The weather was looking pretty good, everywhere but at Ocean City. 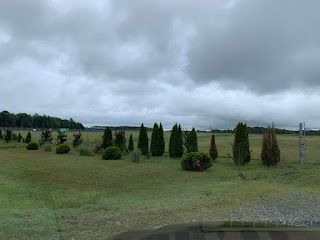 That low hanging scud blew in and teased us as we could see the blue sky and high cloud layers peaking through.  We sat and waited for conditions to improve.  At least there was a good wind blowing from the north east, helping push this mess out of the area.

We sat and waited until just about 9:00. Finally it opened up and we had a clear shot to climb out from runway two and make for the shore line.  Once we launched we saw how clear everything looked ahead and changed the flight plan for Cape May (KWWD) then turn towards Millville (KMIV).
Headwinds were 22 knots just off the nose as we made our way across the Delaware Bay. I started my descent and held around two thousand feet as we now approached MIV.  First the approach flaps are added, ten degrees. As we got a bit closer I dropped the gear then a second notch of flaps.

Video by: Joe Clemente
Chet noticed a truck on the grass between the taxi way and runway, I thought it might be Joe C, the airport manager and friend from my working days at DRBA. Sure enough as I got down to the runway I could see him pointing a camera at us.

We taxied to the ramp across from the Flight Line Restaurant and shut down. Joe pulled up as we were getting out of the plane, it was so nice to see him.  I haven't seen Joe since before our accident, thankfully we have corresponded on FB. It was great to shake his hand and give him a hug. We chatted about the airport, and of course projects, it's in the blood.

Chet and I were quickly seated and our order taken at the restaurant. The food and service was very good and as fast as we were seated we finished our meal. Once headed out to the plane we each checked weather and winds at Millville and at home, in Ocean City.
Runway ten would be the best selection so we started up and taxied across one-four, three-two, following taxiway Juliet to the hold short. Upon completing the run up we launched. I had some gusty cross wind and dipped the right wing, it caught Chet's attention. With a positive rate I retracted the gear and flaps and continued our climb out for the coast.
As we passed over Cape May I leveled off at four thousand five hundred and enjoyed the tail winds that carried us across the Bay at 150 knots. Once shadowing the Rehoboth Delaware coast I descended to two thousand to enjoy the view. 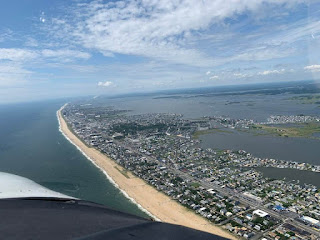 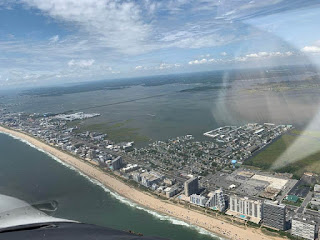 It was a smooth ride home along the coast, and a beautiful day for the beach. As you can see in the pics, there was plenty of beach activity.

I made my position calls and crossed midfield to enter the left down wind pattern for runway two. GUMPS check completed and turning final, I set up for a nice landing, despite the wind gusts.