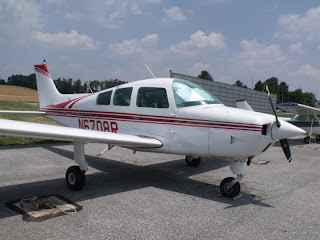 The North East Flyers schedule noted the Kitty Hawk restaurant located at the York, Pennsylvania airport as their next stop. The wx was calling for the hot hot hot and muggies. Dave (M35, POA Forum) decided he was going to take his recently purchased DHC-1 Chipmunk for a lunch hop and of course I had to check it out.

Mary had a few things she wanted to do this morning and with the forecast heat and haze she took a pass on the flight. I sent Vince a text and he gladly took the right seat. I rolled through the gate around 10:15 meeting Vince in the parking lot. Together we completed the pre-flight and climbed aboard. I was still way ahead of the scheduled departure time but decided to get the fan turning and shoot an approach into Brandywine airport. Taxi clearance confirmed, we were on our way. 08Romeo climbed out on two seven with a right turn on course to the north. Winds were north- north west at eight knots with some clouds around five thousand. The haze was so thick you could slice it and serve it. As you can see from my track I abandoned the approach and turned west for KTHV, York. 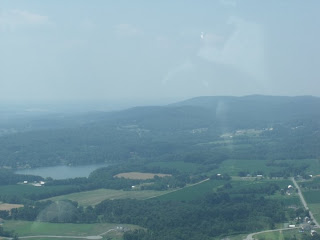 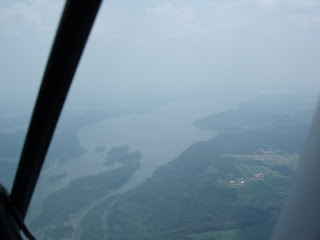 I was on with Harrisburg Approach trying to find traffic that they called out but never had a visual. The Zaon PCAS did track him five hundred feet low and to our four or five then he was gone of the screen, I didn't have the warm and fuzzy feeling. Visibility was maybe five miles up to eight or ten depending on the sun glare in the muck. I made my way in and had hoped to shoot the GPS RWY 35 approach but there was to much traffic to disrupt the flow and the haze made for a new plan. I crossed maybe four miles south of the airport and repositioned for a forty-five entry for left down wind three five. Timing is everything as Vince and I blended in the flow. I turned a short final and pulled the remaining power since I was high and bled off airspeed and altitude overflying the displaced threshold. As I started to flare with everything looking good 08Romeo ballooned, then wanted to simply plant herself, stall horn blaring. I added a touch of power and made a soft landing, with a long roll out for the restaurant. 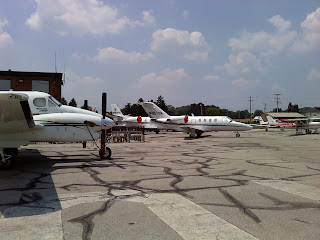 Vince and I sat down and ordered when Dave arrived in the Chipmunk. He soon joined us and placed his food order. It was great to catch up and hear the details of the chipmunk purchase and plans for upgrades. As we sat and talked Dave G from Cap City waked over to our table and joined us for lunch. Dave drove today and left his Cherokee tucked away since it sounded like the drive was faster and closer than a flight. As we were finishing up I thought I saw Mike B (110knots.com) walk by the windows facing the ramp with his son, sure enough it was Mike and Steven. Mike made the trip from Morristown and enjoyed some actual time on the way. We all sat and chatted for a bit the headed out to see Dave's de Havilland Canada Chipmunk. 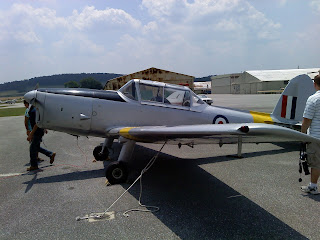 The de Havilland Canada DHC-1 Chipmunk is a tandem, two-seat, single-engined primary trainer aircraft which was the standard primary trainer for the Royal Canadian Air Force, Royal Air Force and several other air forces through much of the post-Second World War years. The de Havilland Chipmunk was the first true postwar aviation project of de Havilland Canada. Today, over 500 DHC-1 Chipmunk (affectionately known as "Chippie") airframes remain airworthy with more being rebuilt every year. The production version of the airplane was powered by a 145 hp (108 kW) in-line de Havilland Gipsy Major engine. 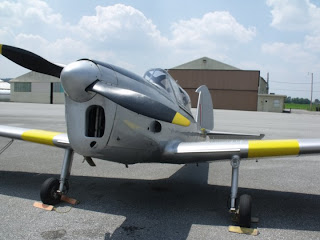 Dave needed fuel so we all checked out the plane. Paint and fabric seem to be in excellent condition and Dave has plans for some upgrades to the cockpit. It looks to be a fun ride! We made our way to check out Mike's 172 and the avionics followed by a quick peek at 08Romeo. We said our goodbyes and I climbed aboard to set the brake while Vince pulled the chocks. I taxied out a few behind Dave and watched his take off, I think Vince has it on video. Vince and I cut through the haze the entire trip home. Harrisburg handed us off to Potomac followed by two hand offs to Philly approach. Once we had Wilmington in sight Philly cut us loose. I contacted the tower and as directed entered a midfield right down wind for runway two seven. Smooth landing and taxi to Red Eagle to call it a day.

Mary and I planned to make the hop to Wings (KLOM) for dinner but with this heat and haze I think we will drive. I'm up tomorrow at 5:30 for another Instrument lesson, I hope the heat lets up. 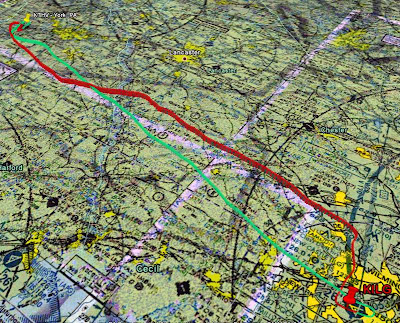 Neat! I didn't know Dave bought again. Sounds like you had a good flight and your copilot got some good experience with summer haze. Hope to catch up soon. Rob.

Great trip for food and friends as usual. Looks like the haze I had for my flight down to Cincy last week!