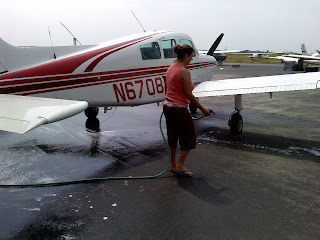 Since the Ohio trip was a no go Mary and I decided we would give 08Romeo a bath along with a wax . I taxied up to the Red Eagle shop and just off to the side parked 08Romeo and set the chocks. All our supplies were in the back of the SUV and we jumped right in. Wow, there were some serious bugs splattered all over every inch of the leading edges. The tail was equally as bad as the wings. I pretreated with a special mix and then got to it. I did a lot of hand work along the leading edges but it turned out very nice. The nose was clean even inside the nose plug area and we lightly sanded and re-painted the nose gear, it was looking ratty.

Mike B walked through the gate and jumped in to offer supervisory skills but Mary shot us both down and....she was holding the hose. Sort of like the golden rule but with water. Mike was meeting Frank D and I think they were headed south to Elizabeth City in North Carolina. I taxied 08Romeo back to her tie down and finished up waxing as Frank and Mike climbed out on runway one four.
A fun day, a clean plane and two tired pups. Heading out for lunch then home to wash the SUV and car. We have no big plans for this evening so I'll get some study time in for the oral portion of the IR.
Posted by Gary at 1:41 PM