Oil Change and a Once Over

With our scheduled trips just around the corner I decided to change the oil on 08Romeo. I had fourteen hours remaining until I hit the magic fifty, but better safe than sorry. After giving it some thought, I would rather get the change done by my shop then on the road somewhere and with people I don't know. With this plan in mind, I filed for this mornings flight to 58M - Claremont. in Elkton, Maryland.

After completing my run-up I taxied for runway Zero-Two, yes, I have the numbers correct today.  ;)  Winds were 13 gusting 19 and 40° off the nose on climb out.  Since I could not raise Potomac Clearance Delivery  on the ground, I decided to pick up my clearance with Dover Approach in the air. ﻿
I was maybe five or ten miles north of Ocean City when I reported my position and Dover responded with East of Salisbury 17 miles. Position checks was my response and I awaited my clearance. Dover provided my clearance and with the one change dialed in, I was now turning direct DQO (DuPont)VOR located on the field at Wilmington instead of the ENO (Smyrna) VOR.
Not a big change in direction, just having to pass my left turn towards 58M and then double back. Having been through this routine before, I knew this would change as soon as I was handed off to Philly approach, and it did.

Philly gave me direct 58M and directed me to descend to three thousand. Once at three thousand and advised to report the field in sight, I cancelled IFR. Previously, I was asked what approach I wanted and I had responded Visual three-one since I didn't have a safety pilot so I couldn't wear those spiffy foggles and log it.

I made a nice landing and taxied clear, making my way to the first shop entrance located on the west side of the hangar. I briefly waited as the guys tugged out a Piper Arrow so 08Romeo could get inside the building where it was warm.
Stan did the oil change for 08Romeo. It's always fun catching up with the guys at the shop, a very friendly bunch. The only thing that really needed attention was the anti-chafe tape along the top of the firewall where the cowl sits on the edge. 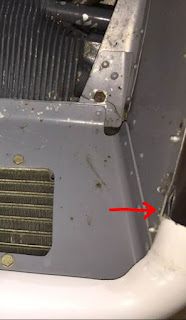 I also have a small hole that rubbed on the bottom corner of the baffle just inside the cowl where the top and bottom meet. That will take some Permatex oil resistant silicone to seal up and prevent air from blowing by the baffle.

With the change and once over complete, 08Romeo was ready for a leak test. I squared up my bill and stored the two extra quarts of oil in the baggage area for the upcoming trip.

I gave some thought to filing for the ride home but there was no radio frequency or number to call.  I know, call the 800 number, I didn't feel like waiting.  It was VFR with the layer sitting at three thousand three hundred. If I didn't like the ride below I could climb above the layer and get a pop up to descend into Ocean City. I was happy to just ride along below the layer, at least I thought so.

It was bumpy, what was I thinking. I stayed below as a punishment for being lazy and not filing, lesson hopefully learned.  The trip didn't take as long as bucking the headwinds north and I was soon making position calls for home. There were two aircraft in the area, one doing pattern work and the other climbing out west, towards Salisbury.

I was number two for the field and made a nice landing with winds once again coming across the right side of the nose. I taxied clear and tucked 08Romeo back in her nest.

With the battery minder and pre-heats connected along with her two moving blankets over the nose, she was once again ready for slumber. Until the next time my trusty ride.
Posted by Gary at 7:38 PM