I decided to add a lesson to the flight schedule this afternoon after watching the wx for tomorrow. A quick call to Aeroways for fuel and I added my info to the online scheduler. I left work at 3:30 and headed north for a haircut, cancelled my blood bank donation with a phone call then turned south for the airport. I walked through the gate around 5PM and started my pre-flight on 08Romeo.

CFII Tom arrived on time and we discussed this evenings flight. Although we previously had discussed timed turns and partial panel work the plan for tonight was shooting approaches. I departed Wilmington and entered the simulated layer at 900 feet proceeding to the south west practice area.

We role played ATC and I followed directions for altitude changes and vectors, eventually proceeding direct ENO (Smyrna VOR). Once crossing the station I received vectors to the ILS RWY 1 at Millville. I shot three good approaches flowing through my WIRE and GUMPS checks, with each attempt going missed and receiving vectors for the next go round. My altitude was steady all night but on my first approach I was a dot wide right on the localizer, just left of the runway but I could have landed the plane.

Tom has me no flaps 90 knots which I am getting used to needing to work up the new numbers and get them stuck in my mind. The second and third approach went even better, rode the GS on rails down to 300 feet, went missed each time after the MAP which he quizzed me on. The localizer tracked solid on this round. On the last approach I was given an intercept and I read back maintain 2000, cleared ILS 10 Millville, he caught me. Tom asked what was the difference, I explained I had to maintain the last Altitude (2000), once cleared/established I could proceed with the approach and intercept the GS down to 1900.

Following the last missed approach Tom gave me vectors and a climb to altitude while I was plugging in the direct to KILG info on the GPS and radio frequencies. Tom commented on how my division of time was excellent with short bursts on the GPS and back to the scan all the while maintaining the standard rate turn and 500 fpm climb to assigned alt. With the two last 30 degree bank turns taking me to final, I flipped up the foggles at 900 and followed with a nice landing to close the lesson. Partial panel and timed turns the next time up. 1.9 in the log this evening and I'm excited about the IR once again! 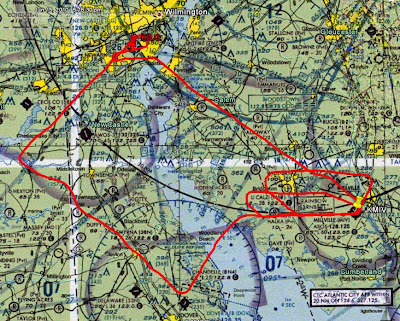 I'm not sure who's more excited about getting the IR done - you or your dedicated blog readers ;-)