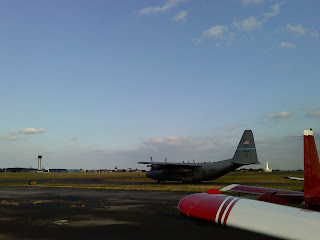 Wow! What a long lesson! As you can see it was a great night to fly as the Air Guard had the C-130's doing laps around the area and us bugsmashers were out in force.

It's been a crazy week with work and trying to fit in IR lessons. Wednesdays lesson was cancelled for wx(potential boomers)and it turned out to be a decent day for some actual with aircraft breaking out around 800 - 1000 feet at Wilmington. I rescheduled for tonight and it was perfect. Well, as perfect as one could hope for but I really didn't get to enjoy it under the foggles.

The plan for this evening was timed turns and some partial panel work. We climbed out of Wilmington to the south west practice area and I entered the simulated IMC at 1000' or there abouts. We had good opening discussion on the ground and now it was time to work the plan. With a partial panel (DG Failed/covered)I had the use of just the compass, standard rate turns and picking up the clock second hand in my scan and do some 360's and 180's. Honestly, I haven't done this stuff in ages! It wasn't to bad having to make small corrections with maybe a five second burst. I did turn the wrong way at first working off the compass....embarrassing. 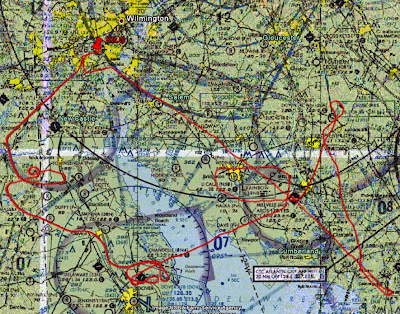 With the "partial" partial panel, only lost the DG, I still had my Attitude Indicator, I was headed direct to the Smyrna VOR (ENO). I was directed to hold East on the 90 degree radial, left turns. I really struggled painting that picture in my mind not having the DG to visualize my entry and see the hold racetrack. I did manage my outbound turn to 90 degrees and made an ugly parallel entry. I managed to track the 270 degree inbound and once crossing the station made the nonstandard left turn back out on the 90 degree radial. I should mention here how much I love the Garmin 530 and if I loose vacuum and my back up system fails I still have my 496 battery powered GPS. Yes, I hugged my 496 last night.

Ok, back to it. From Smyrna I was to proceed direct Millville (KMIV), expect vectors to the ILS RWY 10 approach. I chugged and plugged while minding my heading and altitude. Oh, my DG is working again! I went through my WIRE and GUMPS when appropriate and concentrated on flying the plane. Once given the last heading change to intercept I was cleared for the approach. I alerted Millville radio and made my call to report LADIE inbound. I was a bit high on glide and got a bit out of shape on short final as I reached the Decision Height of 300'. My last correction was to large since I was so close and when I simulated breaking out (flipping up the foggles) the runway was to my right and I was pointed maybe 30 degrees nose left of center line. I got back to the runway, went missed and once passing the MAP I started my left turn direct cedar lake (VCN). 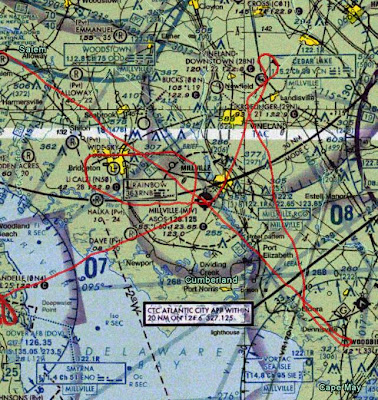 I made a teardrop entry and tracked out bound correcting for the winds then turned inbound on the 218 radial for my first lap. CFII Tom cut that short and with some ATC role play had me heading for the GPS RWY 32 approach direct LAYIB. This approach would require a procedure turn with a parallel entry. This PT is a bit different, instead of the 1 minute outbound I would need to go 4 miles. As you can see it looks really long but that was 4 miles when I turned inbound. It's six miles to the final approach fix ZUNIE and at 90 knots I was ahead of the plane and running my WIRE and GUMPS check a second time. I haven't been night flying in a while, even though I am current but as we all know that does not mean proficient. I briefed the plate again and reviewed the missed procedures. At ZUNIE I advised Millville radio of my position.

Once crossing the FAF (ZUNIE) I was calling out my descent from 2000 to 420, monitoring my rate of descent and adjusting power. Once breaking out of the simulated IMC I added flaps and set up for a full stop landing. Not a bad landing for my first night time in almost a month. On roll out my flap handle tangled with a headset wire, memories of my first flight in 08Romeo. I called I'm eyes out as I rolled to taxiway Charlie and exited the runway.

Once clear and announced we got the headset wire issue resolved. My landing light really needs to be adjusted to the right. It lights up way to far out front, I need it closer so I can taxi not spot deer. I taxi back to runway three two and while waiting for the twin in front of me to head out I set up for the hop back to Wilmington. I advise departing three two and start my roll. Airspeed alive and everything in the green I am looking to rotate. As I maintain centerline and about 60 knots all the runway lights go out. FLY THE PLANE! Note to self last check at night is to reset the lights for my departure. I was climbing out, 08Romeo appreciates the cool temps and wants to settle in around 800-1000 feet a minute climb but I trim that thought of hers back to 500 feet. I flow through the WIRE check and follow vectors. Cleared to land number two behind a Cessna I flip up the foggles on final. I'm high and make adjustments accordingly to end with a nice landing.

The numbers in review; 295 miles flown, 2.7 hours total and 2 night landings, 1 ILS and 1 GPS approach. I still felt ready to go when Tom asked as we secured the plane. However, once in the SUV and heading home the adrenaline rush was over and I felt like I got hit by a truck. I was glad to get home and crawl into bed. Mike B calls me the machine when we fly and I do like to fly, constantly, but tonight my tank is finally empty.

Some thoughts on tonight's flight:

A last crazy note....Mary and I sort of dubbed 08Romeo "Juliet" as a spin off of her tail number. However, I have found myself calling her Elizabeth more than once, to the point Tom has noticed. Maybe its my first car, a 73 Monte Carlo's spirit joining forces with me once again. She was known as Elizabeth by my friends and family. OK, it's really late, actually almost Friday. I'm tired and my brain is wandering. Time to head to bed.

Alright, let's make it official... she will now be known as Juliet Elizabeth Mascelli!

Plus, that way she'll officially be your JEM!

My brothers initials! I hope I can catch your next show...funny guy!