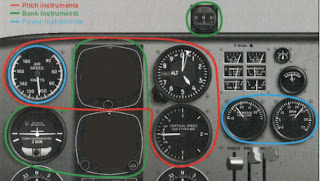 Pitch instruments - partial panel (red)
altimeter (ALT)
airspeed indicator (ASI)
vertical speed indicator (VSI)
Bank instruments - partial panel (green)
turn coordinator (TC)
magnetic compass (MC)
What a long night flying. I logged ‎2.5 of 2.8 hours flying partial panel to include a VOR A (2), ILS and a GPS approach along with tracking VOR to VOR, two procedure turns and a hold.
Tom worked me pretty good this evening and I was a bit shaky tracking that first leg from the ENO VOR to VCN. I was able to use the collins nav radio to assist in tracking the TO radial. I started heading more north then north east and had to make aggressive turns to intercept and hold the course. Let me just add here that I absolutely hate the wet compass. A new vertical card compass has moved to the very top of my want list, ASAP.
Having went through WIRE and GUMPS I made a pretty good procedure turn (PT). Once crossing VCN (Cedar Lake)I shot the VOR A approach into Millville. I was going through the motions but not verbalizing the 5 T's, I need to do this. Not a bad approach partial panel and the rust is finally off. I tracked out bound for the missed, did a lap in the hold and shot the approach one more time. Next up was vectors to the ILS RWY 10 and I got the garmin 530 back, well partially back, I didn't get my favorite Nav 1 screen with the CDI. I made a nice PT at LADIE and continued in. A tad high on the glide slope but better that than low especially on partial panel. Simulated breakout was at five hundred feet, just wide right, followed by a full stop landing that was flat
It was a quick turn around and we were soon back in the air heading home. I contacted Philly approach, gave my position and requested the practice GPS RWY 27 approach into Wilmington. I was given a direct to OOD, Woodstown VOR. I did get to plug the direct to on the GPS but only used the Nav 2 page. I reviewed the plate and was eventually handed off to the tower as I continued inbound. With a quick wind check I was cleared to land runway two seven. I kept a bit more power in and tried to extend my view down the runway which made for a very nice landing.
I couldn't wait to take off those stick-ons that cover up the instruments!! Two night landings in the book and, dejavo, my transponder may be trying to S*^# the bed. Bad thoughts of the Archer's nav/com failure the day before my checkride a day prior to my hip surgery last year. The transponder was acting up with Wilmingtons Tower and Philly approach.
I'll be making a stop at Red Eagle tomorrow during my lunch to get it checked out. We meet up Monday afternoon for a quick hop to work on any last minute items, then meet with the DE on Tuesday after going through all the paperwork, airplane logs and my flight log books. Maybe late next week for the ride!
I am beat!! Time for a shower and then crawl into bed.
Posted by Gary at 11:48 PM