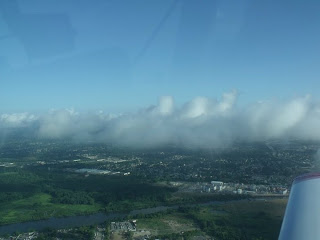 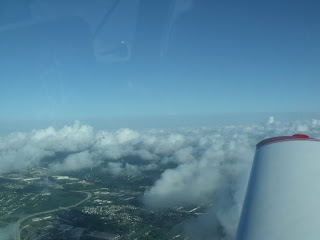 located in Elkton, Maryland. I had scheduled the Oil Filter add on and Roger's shop could get me in this morning for the oil change, we doubled up and took care of both items.
METAR KILG 091051Z 09005KT 10SM FEW018 24/22 A2999
I climbed out of Wilmington on runway nine with a left turn on course. I decided to climb over the top of the layer and planned on looking for a hole near Elkton. Vince got a real 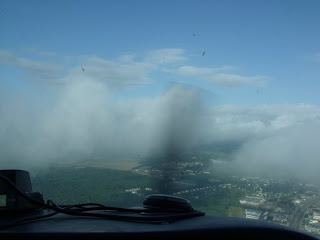 kick out of flying above the clouds and we had a smooth ten minute ride. Just east of 58M there was a good size hole that we descended through as if it was put there to guide us in. I crossed midfield a couple hundred feet under the pattern and had to climb to enter on target. Midfield left down wind entry followed by base and final. I was hot and high, I made the decision to go around. Once around the pattern and I was back on final, slow and working my short field for a smooth landing. I let 08Romeo roll out with little braking action and made my way to the Cecil Aero hangar. 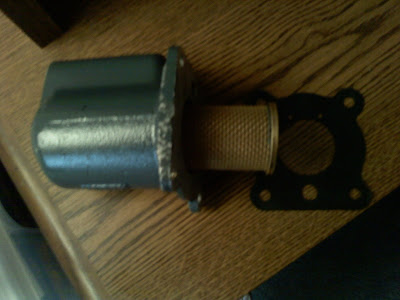 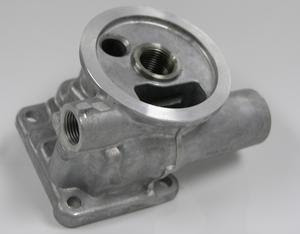 After reading about the screen vs filters this is what I take from it all. The reason the screens were issued originally is that back when these engines were first designed the most common oil used was a straight-mineral oil. The oil was cheap and thus not as big an issue with frequent oil changes. Heck, I still think oil is cheap insurance for our engines. The screen kept larger particles from damaging an engine, but smaller particles continued to circulate until the engine was shut down. Then they dropped to the bottom of the sump and settled out. Dispersant oil was invented to keep the small stuff suspended so as to drain out with the oil, the idea being to extend engine life and reduce crud remaining in the engines and subject to being dislodged and sent through the system. That is when filter elements came into popular use in order to filter out particles re-circulating with the dispersant type oil. If using AD type oil then an oil filter is necessary to keep those suspended particles from recirculating. 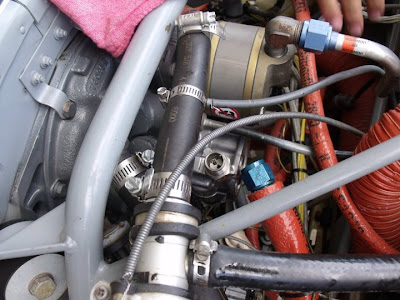 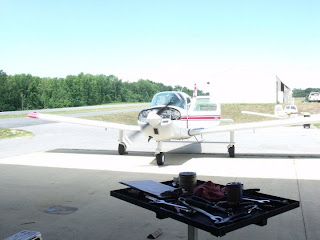 Panorama of the shop

With the new parts installed, the aeroshell oil added and the top cowling installed it was time to get home. Roger added the notation in the Adlog for the work, I paid the bill and we saddled up. I taxied out to runway 31 and departed to the north. I gave some thought about lunch at KMQS, Chester county but diverted back to Wilmington. We flew through a light shower but the clouds were not looking good. I decided it was best to get on the ground and find a place to eat rather then get stuck away from home if thunder boomers moved in. A fun day flying even though it was only .9 in the log. As always great to have Vince along and what would I do without his photo skills!

Awesome Gary ! Good ADM for the Go-Around. That place needs a good stable approach and departure. Neat airport though. Those clouds were neat on Friday, glad you got to share with Vince.

Here's to many more hours of a happy Juliet with that nice filter!