Thursday night and the temps are looking good for my instrument lesson. I arrived at the airport early to complete my pre-flight and be ready to go when Tom comes through the gate. I had to take on fuel which means waiting on the fuel truck, I should have pre-ordered. Tom walked in as I was setting up the office. I got my charts and plates squared away and was waiting for the Garmin 496 to show me wx and TFR updates.
The plan for tonight was heading to Millville and shoot multiple approaches. My altitude was spot on this evening and on course very good. I worked on the five T's while chair flying at home and for the most part incorporated them into my flight. Tom did say that when my workload got busy I would say the five T's but was late "talking" to approach or just late on my throttle setting. I did meet the approach altitudes and did really well on the ILS glide slope. On the way home from Millville I contacted Philly and received vectors into Wilmington for the GPS RWY 9 approach. With the second vector I was also given direct DREFF, cleared for the GPS RWY 9 approach into Wilmington. With a chug and plug on the 530 I was on my way, hmmm,...she's good (Controller)I was pointed right at the fix.A fun night flying, tying it all together.
We plan on a short xc to Atlantic City or Lancaster next week filing in the system and letting me work through everything. It will be a good refresher from my cross country over a year ago and a boost for my confidence. I want to get some additional partial panel time in and some unusual attitudes then schedule with the DE. It's nice to know that light at the end of the tunnel, it really is just the end of the tunnel......and not a train.
Approaches at Millville: VOR A, ILS RWY 10, GPS RWY 32
Approach into Wilmington: GPS RWY 9 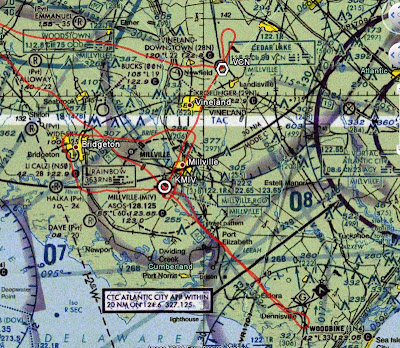