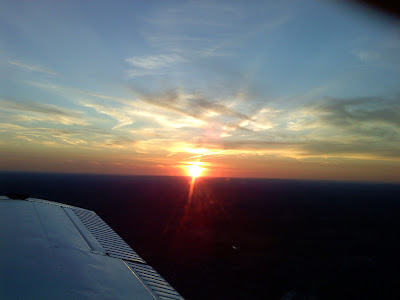 Mary and I decided to meet up at the airport for a quick hop to Wings field. I scooted home and got the zoo squared away and I showered. Mary picked up her car from the Benz dealer since the service was complete and went straight to the airport. I had already completed the pre-flight and I was ready to get started. I was cleared for take off on two seven with a right turn out. It's maybe twenty minutes tops to Wings. I picked up flight following since Philly sounded busy and was quickly handed off to the next sector on 124.35. I checked in, Philly approach Sundowner 6708Romeo, seven North East of Wilmington, VFR to Wings Field, 2,900 level. He responded well your already in the bravo so your cleared maintain 4,900. Say what???? I replied altitude 2,900 for 08Romeo. He gave me the current altitude which I had already picked up and dialed in, then he asked me to change my squawk code. Now Philly was reading altitude 1000, still not correct. I recycled and went back to squawking 1200, altitude finally came up at 2,900, we were on the same page. We did have one traffic call out, the met life blimp. That's right, Snoopy Air One, very cool. (file photo) 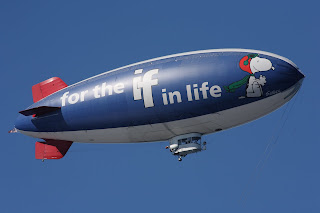 After that ordeal I was glad to get on the ground and did so with a smooth landing at Wings. Mary and I secured the plane, I cleaned the transponder antenna and made sure it was secure along with giving the radio a wiggle to make sure it was secure. We headed to the club for some refreshments, I had ice tea, and some great food. BBQ Ribs, some sort of hot pocket stuffed dough thing, cheese, veggies and other delights.
It was getting late so we said our goodbyes to Adam,Tam and other guests then headed for the plane. Adam walked acroos the ramp with us and we chatted as I checked fuel and untied. Adam and I drooled over the Cirrus tied down next to me with air conditioning, it had some strange mesh grill on the right side rear with what looked like a condenser of some sort tucked inside. This will require more investigation.
We climbed out of Wings and headed for home. No flight following just a beautiful sunset and my Bride, very peaceful. Another smooth landing with a longer roll out than normal and we are clear of runway two seven. We secured 08Romeo and called it a night. We'll pick up Mary's car in the morning sometime after breakfast.
Posted by Gary at 8:40 PM