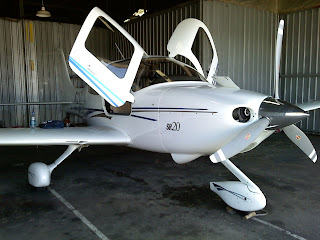 I awoke to a beautiful day and just had to go flying. Mary decided she was going shopping with her Mom for shoes so she said go play with the boys. Who am I to argue? I traded text messages with MikeB and made plans to fly this afternoon. Mike had a lesson at 11am lasting until 1:30ish and also had a reservation to fly the SR20. Instead of driving to Lancaster the plan was for me to make the hop from Wilmington,(KILG) to Chester County,(KMQS) to pick him up and together head to KLNS.

I secured 08Romeo on the flight line and walked into the terminal, I figured it was better to sit and wait in the a/c then out on the ramp and bake. Mike finished up and we headed out to climb aboard 08Romeo and get in the air. I departed runway two nine and turned out for the noise abatement. I was pointing for home when Mike asked if I was going to turn on course....LOL...sorry still laughing at the thought. Well Duh, I'm a dope, we're headed the opposite direction if we are going to LNS. It's like driving to work, your car knows the turns and you just do it, even on the weekends when your headed somewhere else. Ok, you know you have all done it at least once.....right?

I shot the RNAV GPS RWY 31 approach direct AYOSA with a procedure turn and followed up with a decent landing. Mike was working the radios as we split up the duties. I was directed left turn on Foxtrot, right turn Delta for our destination of choice. I pulled the throttle back and Mike made a quick hop out to the office and then back aboard 08Romeo. I would not do this with anyone that was not a pilot and even then I have to feel very comfortable with that person. Mike was buckled in and we called ground for a taxi across the field. I did a full turn around an aircraft looking for the best tie down while trying to avoid the sun heating up the cockpit. I no sooner said the tower guy will think I'm nuts when sure enough, he asked if we were ok. I answered, yes, while I was laughing, I was looking for a tie down with ropes, we have it under control. The tower no doubt thought I was indeed nuts. 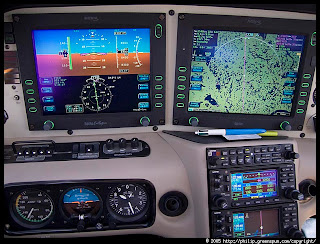 Mike opened the hangar doors and started right in on the pre-flight. I assisted by staying out of the way and pulling the nose plugs and pitot cover. We took on maybe twelve gallons of 100LL to top off and we're set to start this baby up. The checklist is extensive and Mike flows through it very well as the SR20 comes to life, I really love the sound of the Cirrus when she starts up. As we begin to taxi out a message on the Avidyne Primary Flight Display (PFD, left screen in the above photo) Advises of an Attitude & Heading Reference System (AHRS) Failure followed by a communications error with the magnetometer.

From the Emergency Checklist:
Failure of the Attitude and Heading Reference System (AHRS) is indicated by removal of the sky/ground presentation and a “Red X” and a yellow “ATTITUDE FAIL” shown on the PFD. The digital heading presentation will be replaced with a yellow “HDG” and the compass rose digits will be removed. The course pointer will indicate straight up and course may be set using the digital window.
1. Verify Avionics System has switched to functioning AHRS
If not, manually switch to functioning AHRS and attempt to bring
failed AHRS back on-line:
2. Failed AHRS Circuit Breaker - SET - If open, reset (close) circuit breaker. If circuit breaker opens again, do not reset.
3. Be prepared to revert to Standby Instruments (Altitude, Heading). 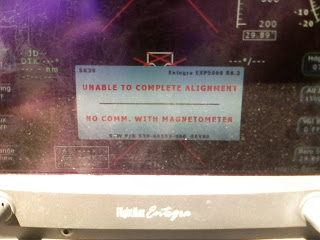 Well, we were still on the ground so Mike attempted to restart the system twice. No luck, the flight was scrubbed. We taxied back to the hangar and tucked the SR20 back into the nest. We walked back out to the flight line and gave 08Romeo a once over and checked fuel for the hop back to Chester County. We climbed aboard and of course I said no matter what 08Romeo, steam gauges and all, is ready to go, I think she liked that. I was working radios and Mike was on the controls flying us back to MQS. Run up completed we were on the go and climbing out. No flight following for the short hop but we did have Harrisburg tuned in. Mike was going to shoot the ILS RWY 29 into MQS and he was getting set up.

I don't remember what Mike was reaching for or exactly what was going on when his door popped open. Yes, the second in flight door open in two weeks! We immediately transferred controls with the typical your plane, my plane, your plane. After quick evaluation I advised we would try to close the door per the POH procedures. Mike kicked into *CRM mode and went right to work. I slowed 08Romeo and applied right rudder to slip the plane and take some airflow off the door. Mike tried to secure the door but it was a no go. Having went through this not long ago I knew the buffeting would be strong and 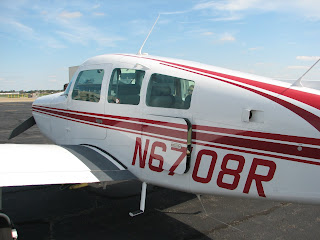 the plane almost feels like there is an engine failure going on. The vibration picks up, the yoke gets heavy and pulls at your hands and the noise makes you think the power plant is missing on a few cylinders. I kept the radio and made a call that I was going to enter a left down wind for runway two niner with a midfield crossing entry. The Vertical Speed Indicator was falling off the table at one point showing -1500 feet. I know the static port was robbed of air with the door open and this had to have an effect. The airspeed was not winding up and we were pretty much level checking with the attitude indicator. The key was holding altitude and speed while getting to the runway, Just FLY THE AIRPLANE. Mike called out altitude and airspeed along with holding the door tight as I turned a circle to land final approach. Mike asked, Flaps? My response, not yet as I crossed the fence then said, one notch approach flaps. A smooth landing and roll out followed.

Once we climbed out we looked things over and came to the conclusion that the strong buffeting and heavy yoke was due to so much air being taken off the stabilator. In review the combination of low air speeds and the base to final turn could cause a problem if your not on top of the situation. Mike and I always have great CRM when we fly and today's "excitement" reinforced that.

Next up for me is a short cross country hop, filing in the system. Mike has his check ride scheduled for his CFI ride this week. GOOD LUCK MIKE!!! 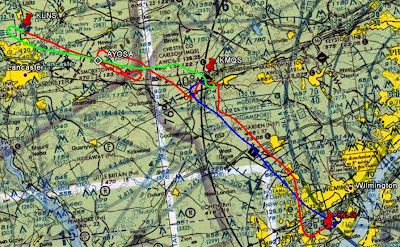 This door ajar sounds much more, uh, interesting than the last one. Maybe it's just the description? Regardless, great job yet again keeping it all under control!

Actually the July 3rd door open was a bit worse since I had to try and hold my door closed with my left hand, work the yoke and throttle with my right hand and hit the PTT.

It would surprise you how much the controls get sluggish and heavy and the vibration makes it feel worse.

I practiced the no rudder door open steering and no elevator only using trim in my PPL training days but don't remember it being like either event.

Is this a common issue on the Beech? Anything you can do to prevent it from happening? It sounds like you have handled well each time it has happened but I get concerned that it is going to cause an issue when something more important is going on.

I have heard about a few open door problems. I did some research on the BAC forums and it seems the main issue is lubrication. The plunger type mechanism needs to extend and lock into place and sometimes it can get gummed up. I ordered a can of the LPS2 lube and will get it taken care of and go from there.

Mike and I talked about that last night, imagine having to shoot that ILS into Chester County single pilot and deal with that. Yikes! On the needles would have a new meaning.