The weather was perfect, the plane and pilot were both ready, it was time to fly! And fly I did, to Wilkes-Barre and back.
I did file a flight plan thinking it would be good practice and good to once again work in the system.  However, I received a notice that my route was amended and with that put the IFR plan on the back burner.  Instead, I decided to fly direct, at 7,500 feet, over Philly airspace and just pick up flight following.

The new plan worked perfect.  I picked up Flight Following with Dover Approach about 15 miles south of the ATR Waterloo VOR. Easy peasy, an extra set of eyes for the ride. 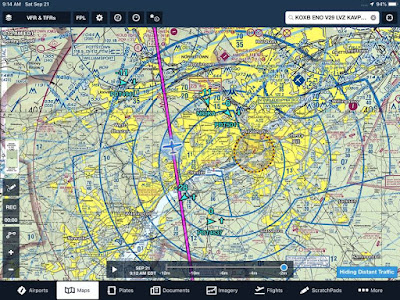 I was handed of to multiple Philly sectors and eventually Allentown Approach. For the most part it was quiet and the ride was smooth. Allentown handed me off to Wilkes-Barre Approach and we rode along until I had visual on the airport. Once you see the ridge line with all the wind turbines you are pretty much there.  Cross the ridge and make your way to the airport.
I should have asked for lower sooner, but it's all good practice for when ATC dumps you on to an approach. I worked my way down from 7.5 and made a nice landing on Runway four. It was a quick taxi to the FBO, Aviation Technologies. The line service was professional and the counter person was just as professional and pleasant.  The FBO squared up my fuel bill and let me use the courtesy car. Perfect! 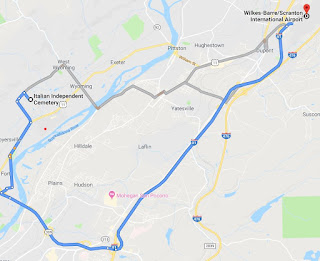 The drive isn't really that long, maybe 30 minutes across the valley. I exited at Forty-Fort and made my way through the side streets to the main drag, Wyoming Ave. From there I drove until I came to the Wyoming Valley Airport, it was just a few more turns to the Italian Independent Cemetery. 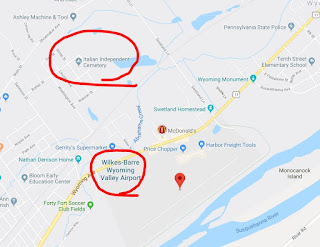 Why don't I use WBW? They don't have a courtesy car and it's a pain to get a rental delivered and picked up.  I'll have to check if things have changed since the last time landing there, it's been a good number of years.

Once at the cemetery I cleaned up around the head stones, one by one, each family member. I talked with each Aunt and Uncle, grandparent, and my parents. I miss them so much. What I would give for just one more conversation or just a few questions answered. I know my Dad would have loved flying, Mom, not so much, ok, NOT AT ALL.

It was time to head back to the airport and return the FBO's car. I made a stop to put in  five gallons of gas and grabbed a bacon cheeseburger at the DQ nextdoor.  Some slob left all the containers from their lunch in the car so I cleaned that out too. I just don't understand people sometimes. And folks wonder why courtesy cars are going away. People, add fuel and keep it clean!

Upon my return I dropped off the keys at the desk. With the car taken care of I walked back to the kitchen area, intent on quietly enjoying my lunch, and reflecting on my day. Why I love to fly...wake up in Ocean City and I'm sitting here having lunch in Wilkes-Barre. Enough contemplation, it's time to saddle up and point 3 Tango Charlie south for the beach. 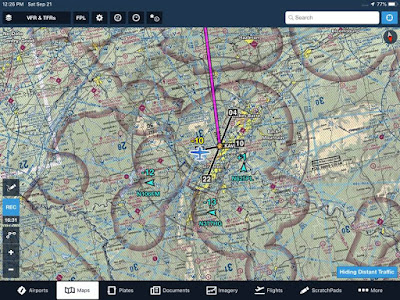 The hot start went well and I sat at idle to bring the oil temps up. I also had to chug and plug the flight plan. Ok, I used the reverse feature then added an additional single waypoint, KMQS.  By adding MQS I would keep clear of Philly's Bravo airspace. I had planed the return flight for for 6,500 feet. 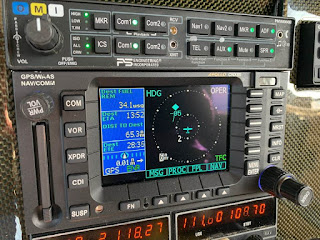 It felt good working with ground and a tower again as I made my way to runway four.  After completing my run up I advised ready to go at Bravo 2, at runway four.  I was quickly cleared to take off.  I should mention that ground gave me a squawk code for flight following, very nice. I wish more airports did this.
I only used ten degrees of flaps since the runway is 7,502 feet. I was up and climbing out, cleaning up gear and flaps, gaining altitude.  The departure procedure calls for a climb to five thousand before turning on course, I turned sooner and cleared the hills since the DP wasn't assigned and I was directed to resume own anvigation.

It was another smooth and quiet ride south. I was handed of to each approach in reverse of this morning. Eventually I was handed off to Dover and canceled with them after passing south of Delaware Coastal, KGED.  I was now just ten minutes from home.

Ocean City was busy with winds favoring runway two-zero.  There were a few jets inbound and they selected runway three-two. Hey, roll your own, just play nice with all the other aircraft.  I made a nice landing on two-zero and taxied for the hangar, it was good to be home.

I'm glad I stretched my wings a bit and went beyond my comfort zone. I'm ready to start adding states and airports once again!

It must have felt great to get out of the local area!

It sure did, it was a confidence booster.